Walks to the pond continue to be a highlight of our daily routine, even though we haven't seen any tadpoles for more than two weeks. When we last saw them, they were in the shallower end of the pond, where the reeds are more dense. This also happens to be as far away as they could get from the deepest part of the pond where the salamanders like to swim. The reeds have gotten quite tall so it's nearly impossible to tell if any tadpoles will survive to frog-dom.

There are five mature frogs living in the pond. They are quite entertaining to watch and listen to. They will have occasional spats over preferred spots for hanging out, but most of the time, they are resting lightly on plants, their little heads poking out of the water. Here are three of them, sunning themselves and enjoying the lily pads that have recently emerged. 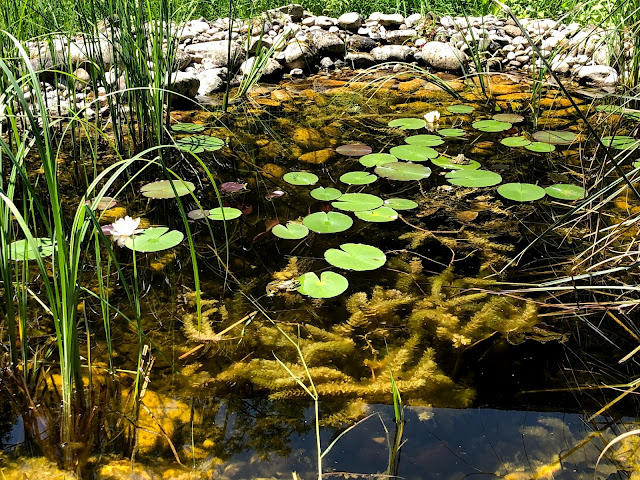 This week we were surprised to see a new animal in the pond.

At first I only saw the tail end of a slender body slipping between the rocks just in front of where I was standing when I took the picture above. I wondered if it was an eel.

Then our pond visitor emerged from the rocks and started swimming through the water towards the back of the pond. Or should I say slithering across the water? Because that's exactly what it looked like.

He passed a bit too close to the frog you see on the lily pad. In a splash, the frog jumped away, heading to the reeds on the left. Then our pond visitor claimed a lily pad of his own and started basking in the sun.

Because he was wet, it was hard to judge his colors and markings, but we think this is a Ringelnatter, a Swiss grass snake. He might be harmless, but like the frog, I'm happiest observing him from a distance!
This experience inspired my poem this week - a haiku. 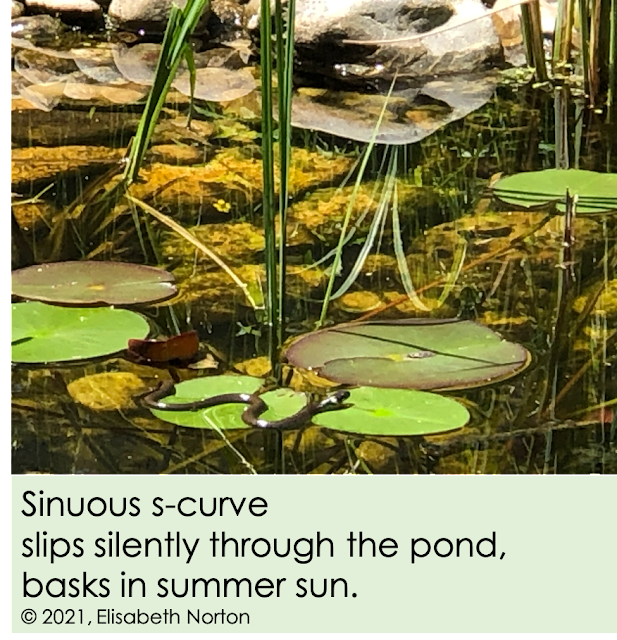 This week Poetry Friday is being hosted by Carol over at Carol's Corner. More poetic delights await you in the Poetry Friday post.