Let's talk about turtles! Last month I was lucky enough to get an advance copy of the wonderful new middle-grade novel, Trouble at Turtle Pond, by Diana Renn, which is out in the world this month!

If you took all the things I care about and rolled them up into one book, it would be The Trouble at Turtle Pond: nature, mysteries, and authentic, inclusive portrayals of neurodiverse characters (in this case, ADHD). This book is full of humor, heart, adventure - and lots of interesting facts about turtles!

When eleven-year-old Miles moves to Marsh Hollow, he’s desperate for a fresh start. At his last school, his ADHD-related challenges earned him a reputation as a troublemaker and cost him his friends, especially after he lost a beloved class pet. With just one chance to make a first impression, “Mayhem Miles” is determined to do something great in this town. Like solving a mystery. After witnessing people burying something in his neighbor’s backyard one night, he’s sure there’s trouble—and this time, it’s not his fault. When his other neighbor, Pia, invites him to join the Backyard Rangers to help protect endangered turtles at the pond behind his house, Miles knows this is his chance to investigate. He stumbles on clues that point to wildlife poaching. Sabotaged turtle traps, stolen eggs, and kidnapped hatchlings put the fragile turtle population at risk. Miles and Pia recruit two more Backyard Rangers to help track a string of suspects, including an obsessive gardener, an eccentric pet shop owner, and the town bully and his drifter uncle. Then the rangers start receiving threatening messages, and an unexpected twist turns suspicion back on Miles. Has his reputation for trouble followed him all the way to Marsh Hollow? It’s up to Miles to convince his new friends that he’s not who they think he is, and to stop the turtle crimes before more turtles—and people—get hurt. A friendship-centered eco-mystery, Trouble at Turtle Pond celebrates citizen science, activist kids, and the power of paying attention.

What's not to love, right?

Shortly after I finished reading the book, we visited our local animal park. I love this place, because their motto is "More room for fewer animals," and over the years they have rehomed some of their animals to zoos and animal parks better able to provide optimal habitats for them.

One of the hbaitats that was previously home to penguins has been home to turtles for several years now. Normally, we look, but don't linger too long before moving on. But not on this visit!

Inspired by Diana's book, we looked a little closer, lingered a little longer, and noticed a new sign. This habitat is now helping to give endangered European swamp turtles a head start before being released in the wild, just like the project that inspired Diana's book!

Thanks to the book, and to the interviews Diana has given about it, I had a greater understanding of the importance of such programs. Turtles that have had the chance to spend their early months in a protected environment have a much higher chance of survival when they are released into their wild homes.

Listening to Diana in this podcast interview, I was inspired to write a haiku-esque found poem about endangered turtles from some of the things she said. This photo is one I took of two of the endangered European Swamp Turtles. 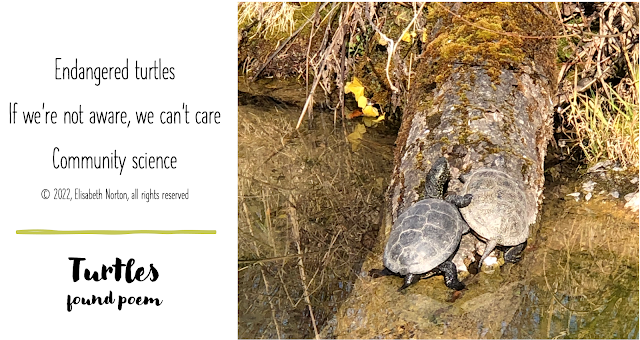 I hope you'll check out Diana's book for yourself, your classroom or library, or for the middle graders in your life who love mysteries, ecology and nature, sensitive portrayals of life from the perspective of someone with ADHD, or all of the above!

You can find out more about Diana on her website, and more about this book in particular at the publisher's website.

Our gracious host today is Matt Forrest Esenwine at Radio, Rhythm & Rhyme. Hop over to check out the round-up of poetry goodness that awaits you today.