Officially, on the calendar, and unofficially (or is it more officially?), in nature.

Every day we see more blooms. 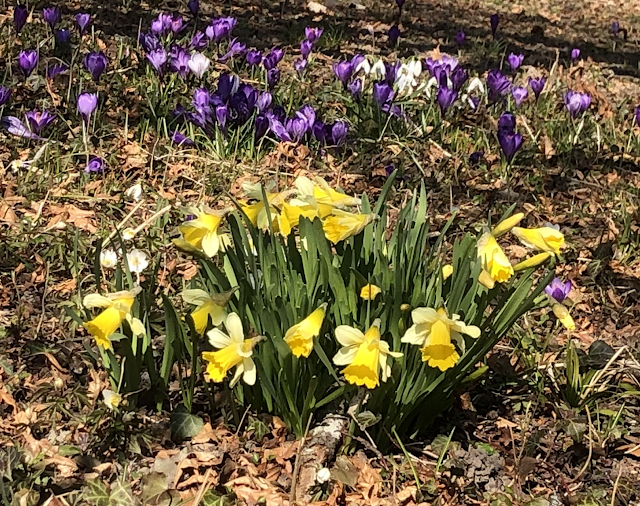 Snowdrops were followed by crocuses, and now the daffodils are stealing the show. 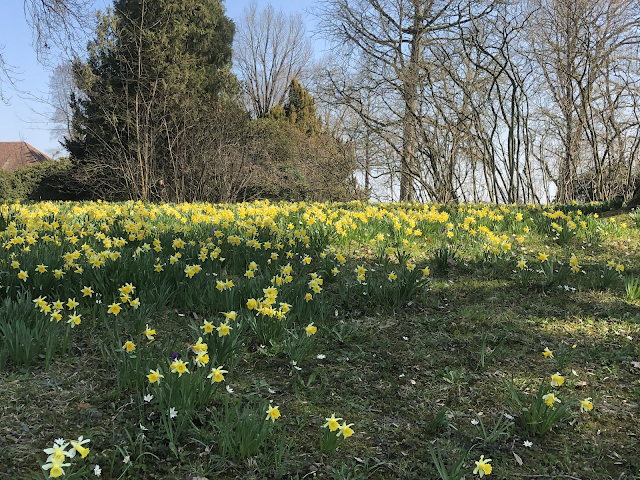 This expanse of daffodils, which we see on our lunchtime walks, has been reminding me of William Wordsworth's classic poem about daffodils every time we pass it, so this week I decided to reread it and look for other poems about daffodils.

I wander'd lonely as a cloud

That floats on high o'er vales and hills,

When all at once I saw a crowd,

A host of golden daffodils,

Beside the lake, beneath the trees

Fluttering and dancing in the breeze.

read the rest of the poem here.

Though we're not walking over hills and vales, Wordsworth's poem definitely captures the rush of joy I feel each time our path takes us past this gentle slope carpeted in daffodils.

My search for other poems about daffodils led me to a new-to-me poem, by a new-to-me poet, Alicia Ostriker. Her poem feels particularly appropriate for this spring, as war continues in Ukraine.

I like how this poem is in dialogue with other writers, including Wordsworth and his poem about daffodils, and how Ostriker wrestles with the cognitive dissonance of a beautiful spring day juxtaposed against the outbreak of war, and I love the last two lines of the poem.

Ten thousand saw I at a glance

Tossing their heads in sprightly dance.

Going to hell so many times tears it

The day the war against Iraq begins

With their outstretched arms and ruffled cups

Blowing in the wind of Jesus Green

Along with the swans and ducks

Under a soft March Cambridge sky

Starting to illustrate a children’s book

Where people in light clothes come out

To play, to frisk and run about

With their lovers, friends, animals, and children

As down every stony back road of history

—Which in a sense is also hell because

The daffodils do look as if they dance

I hope that wherever you are (whatever the season), you are finding beauty in what surrounds you.

Thanks for stopping by to read about daffodils today. Our host for Poetry Friday this week is Amy Ludwig VanDerwater over at The Poem Farm. Wander over to her corner of the internet to see what other poetic goodness waits to greet you today.