January 24, 2020
It's almost February, which means it's the time of Fasnacht here in Switzerland - our version of Fasching (Germany), Mardi Gras or Carnivale. Clubs work for months preparing floats (often around a parade theme), while brass bands practice their Guggemusigg (parade song sets).

I had experienced Mardi Gras before, and knew about Carnivale, but until I moved here, I had no idea that similar celebrations took place in some of the Swiss cantons (only the Catholic ones - although one or two of the Reformed cantons are having parades these days). Since Fasnacht is not widely known outside of Switzerland (and perhaps, Germany), I was surprised to encounter it recently while listening to an audio book.
Kim Stanley Robinson mentions it, as well as other aspects of Swiss culture, in the book "Red Mars." Apparently KSR lived in the French-speaking part of Switzerland for a time, and I'm assuming that's how Swiss people, and some Swiss customs, made their way into his book.

While I don't think he nails everything in his representations of the Swiss and their customs, his descriptions of Fasnacht rang true for me, and it was a delightful surprise to encounter Swiss characters and some aspects of Swiss culture in science fiction.

When I think of Fasnacht, in addition to Guggemusigg and parades, and the light crispy Fasnachtschueche, the other thing that comes instantly to mind is confetti. It's sold in large bags to be thrown by the spectators as the bands of musicians and parade floats pass by.

One of my favorite sayings is "Spread kindness like confetti." I love that thought. Confetti is thrown out randomly, without aim. It flutters in the air, mixing with the confetti thrown by other parade-goers, before landing on the pavement. Although the streets are always swept after the parades, some of the confetti clings stubbornly to the pavement for days and even weeks. And like its indoor cousin, glitter, confetti's superpower is getting everywhere.

For weeks after watching a parade, after you're sure you've found and thrown out every last circle of colored paper, you'll reach a hand in your pocket, or dig around in the bottom of a backpack or purse that you swear was practically hermetically sealed, only to find it: a lone piece of confetti.

I like the idea of spreading kindness like confetti. Of sending it out into the world with enthusiastic abandon, letting it mix with the kindnesses of others, and landing where it will. The world would be a better place if more of us spread kindness that generously. 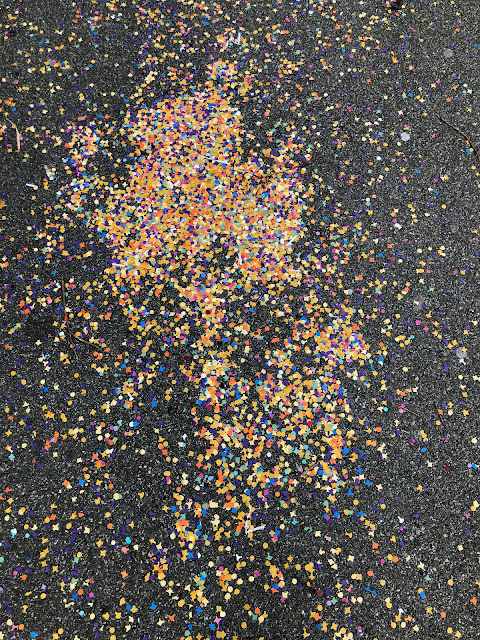